High School Students Attends Senior Prom With his Great-Grand Mother as his Date! 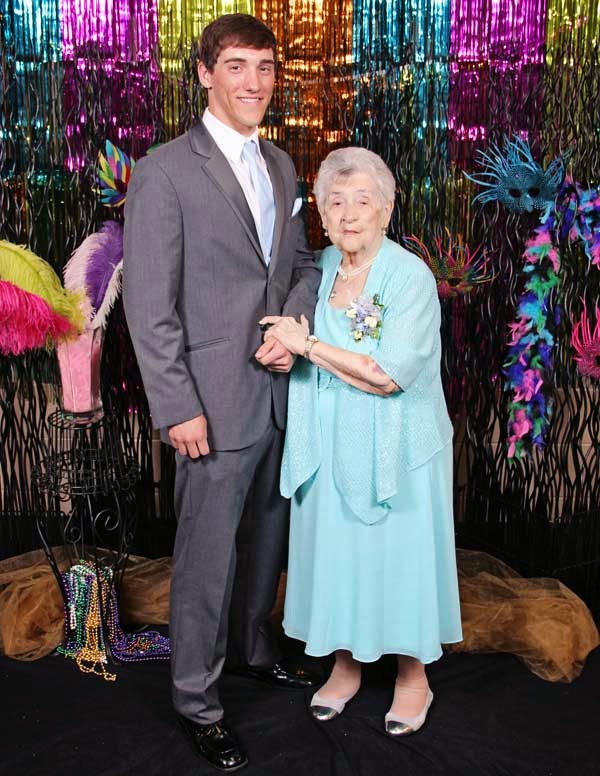 Bringing your mom to prom? Not so cool. Bringing your great-grandmother, who never went to the prom when she was in high school? Stories don't get any sweeter.

Austin Dennison of Rockford, Ohio, took his great-grandmother Delores, 89, to his senior prom — and video of the two slow-dancing while other students get wild in the background speaks volumes about their relationship.

Delores spoke to the Times Bulletin about her night out with her great-grandson. She explained that she warned Austin that she isn't too good on her feet these days (she's survived a heart attack and a stroke). She also wondered if he'd rather take a girl from his class. But Austin wouldn't relent.

The two went out to a pre-dance dinner at their local Bob Evans (a favourite restaurant of Delores', the Times Bulletin reports), and then hit up the high school for fun and dancing.

While walking through the school gymnasium to take their seats, the two took a shortcut through some balloon decorations, Austin told the Times Bulletin. "She is so funny. She was hitting the balloons with her cane,” Austin said.

The pair spoke to Todd Starnes of Fox News about the work that went into finding the right prom dress.

Via Fox News:
"That was an adventure,” Delores said. “We were looking at the young girls' dresses. None of those dresses would be OK for me.”

Let’s just say young ladies don’t dress like they did back in the 1930s.

“They were either too high or too low and I didn’t want any of that,” she said.

Eventually she settled on a pretty blue dress and a clutch purse.

“The purse was for my necessities – my nitro and my puffer that I use for breathing,” she said.

The two were home by 9 p.m., which is later than Delores normally goes to bed, the Times Bulletin reported. Next up, Austin, a senior and an Eagle Scout, plans to attend Florida Gulf Coast University.

Below, an extended cut of the pair's big night.

Would you take your great-grandmother to your prom?
Posted by Unknown at 6:39:00 pm