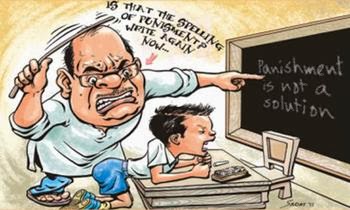 Did you see the video of the school teacher administering corporal punishment on his pupils? It's simply bullying. The only reason he can get away with flogging the children is because they are not as strong as he is.

He even ran it as a democracy asking the pupils whether they would prefer to be beaten on their knuckles, or on their backs. Then at a point he asks some of the boys what club side they support. It was all so annoying because he kept asking "how many?" in reference to the number of strokes he had administered. Then as if to justify his cruel act, he informs them that the reason he asks them to bend over is because"no matter how tall the okra tree is, its owner will still bend it down."

The man even beat the girls too who interestingly took the beating better than the boys.Watch the video here

So is corporal punishment being used in your school and what do you think about its use; does it help?
Posted by Unknown at 10:49:00 pm