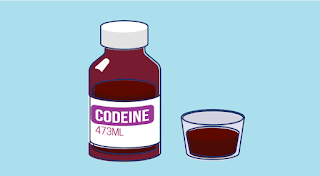 With the recent release by the BBC of a damning documentary showing the extent of Codeine abuse in Nigeria and the complicity of Pharmaceutical companies in Nigeria to the supply of the drug on the street, it has become necessary to enlighten ourselves on the harmful effects of Codeine.

This article culled mainly from www.addictioncenter.com seeks to do just that. The message is SAY NO TO DRUGS as they can ruin your health and future.

Codeine is a prescription pain medication used to treat mild to moderate pain. It comes in tablet form and as the main ingredient in prescription-grade cough suppressants. Tylenol 3, another popular pain reliever, is Codeine combined with Acetaminophen.

Codeine is an opiate (sometimes called a narcotic). Other opiates include oxycodone, heroin and morphine. Street names for Codeine include cough syrup, cody, syrup, schoolboy, pancake, sizzurp, and coties. Codeine use often starts out innocently enough with a prescription for a codeine-based cough syrup. Because Codeine is less regulated than some opiates considered to be more dangerous (such as morphine and OxyContin), getting and abusing it is relatively easy. Though less potent, Codeine provides effects similar to morphine.

The effects of Codeine include:

As an opiate, Codeine runs a high risk of its users developing a tolerance and eventually a dependence on it. Although many people begin using Codeine to relieve a legitimate condition, it is frequently abused as tolerance develops. Many Codeine users begin to turn to the drug to cope with all of their physical pain and eventually their emotional pain as well.

Although some people think the drug is harmless, the side effects of Codeine range from drowsiness and constipation to blindness and respiratory failure. In large enough doses, Codeine may even be fatal.

An addiction to Codeine may develop from continued abuse of the drug in its cough medicine or pill form. Codeine can lull its users into a false sense of security because many people do not consider it to be as powerful or addictive as its opiate family members.

Many people don’t stop at Codeine. They try to get a better high by mixing it with other substances including alcohol. Because Codeine and alcohol are both Central Nervous System (CNS) depressants, combining them can lead to dangerous levels of depression in the brain and respiratory system.

Codeine and Other Drugs

For some people Codeine is only a piece of a larger web of addictions. Sometimes, it is the gateway drug into addiction to other substances, especially to other opiates like oxycodone and morphine.

Because multiple drugs in a user’s system can change the way treatment is administered, it is important to be honest in discussing all of your addiction with a treatment counsellor. No matter what drugs you use, there is a treatment solution for you.

Codeine cough syrup is used to make “purple drank” which is a recreational form of the drug made by mixing prescription-grade Codeine cough syrup with soft drinks such as Sprite and Mountain Dew, for consumption in large doses. It is also called lean, syrup and sizzurp.

Alarmingly glorified in popular culture, Purple Drank has been referenced throughout multiple songs and television shows. It is mentioned in songs by artistes like Lil’ Wayne and Three 6 Mafia.

Rapper, Lil’ Wayne was admitted to the intensive care unit in March, 2013 with seizures and unconsciousness caused by extremely high levels of Codeine. Though he survived, he was in critical condition after having his stomach pumped three times to remove the drug from his system.

In Nigeria, the song Codeine diet glorifies the abusive consumption of Codeine. The song features icons of popular culture, Tiwa Savage and Reminisce. The theme of drug abuse is also to be found in the song Science Student by another music star, Olamide. So far, neither of the songs has been banned and no leading voices have spoken up against the themes of those songs in particular or about the effect of popular culture on the increasing problem of Codeine abuse in Nigeria.

This acceptance of drug abuse in popular culture is capable of making drug abuse seem cool or hip and there should be more voices saying otherwise.

Reliable data and statistics on abuse of Codeine in Nigeria is hard to come by but recent newspaper reports have quoted members of Senate as stating that about three million bottles of Codeine are consumed daily by women and youth in the Northern states of Kano and Jigawa alone.

Prevention is Better Than Cure

The best way to prevent a Codeine addiction is never to take the drug without a doctor’s prescription.

For those battling with a Codeine addiction, while organisations or agencies dedicated to addiction support in Nigeria may be hard to come by, the best course of action is to see a doctor. He is in the best position to assess the situation and if necessary refer you to a specialist.